England continued their preparations for Wednesday night’s mammoth Euro 2020 semi-final with Denmark in a final training session at St George’s Park before they leave for London.

Gareth Southgate‘s side took to the training pitches at their base on Tuesday morning to be put through their paces one last time before the clash in front of 60,000 at Wembley.

The Three Lions, who booked their semi-final spot with a resounding 4-0 win over Ukraine on Saturday night, had no new injury concerns to worry about with the entire squad available for Tuesday’s session. 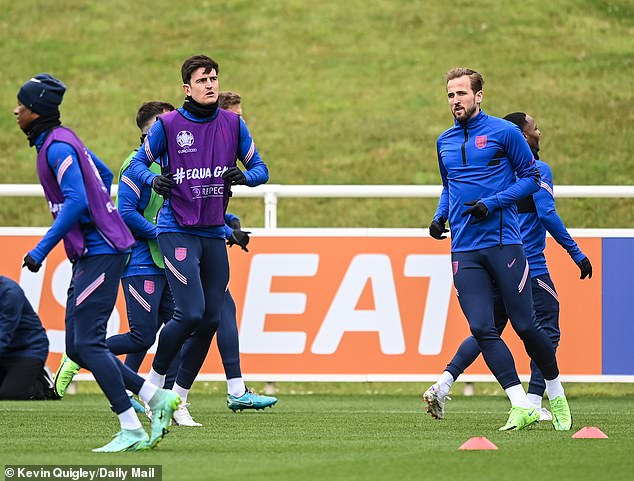 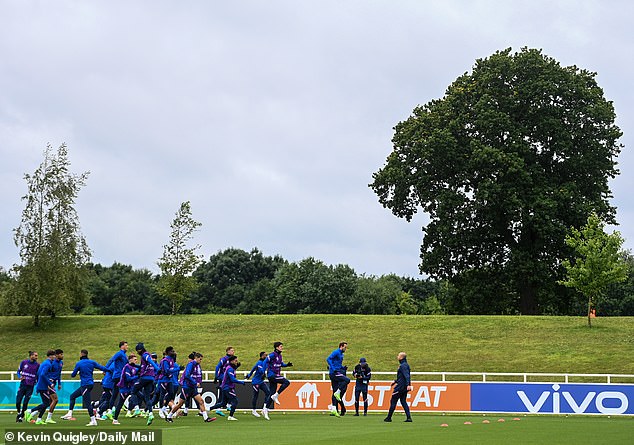 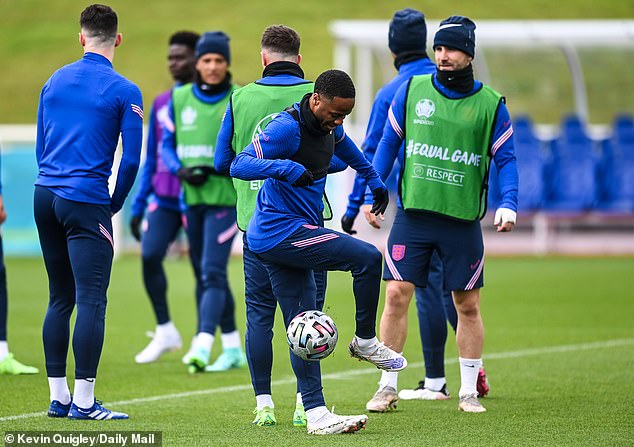 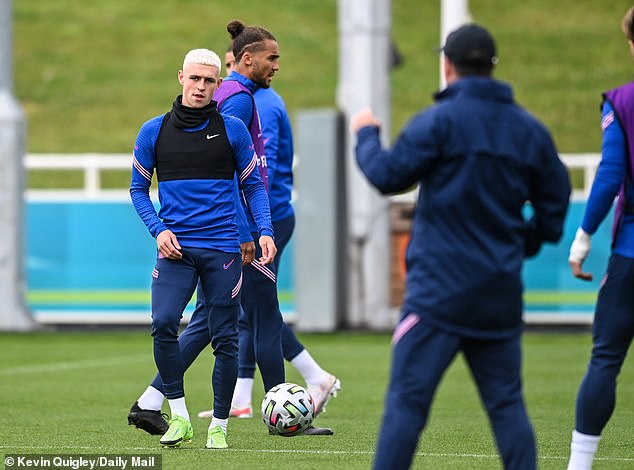 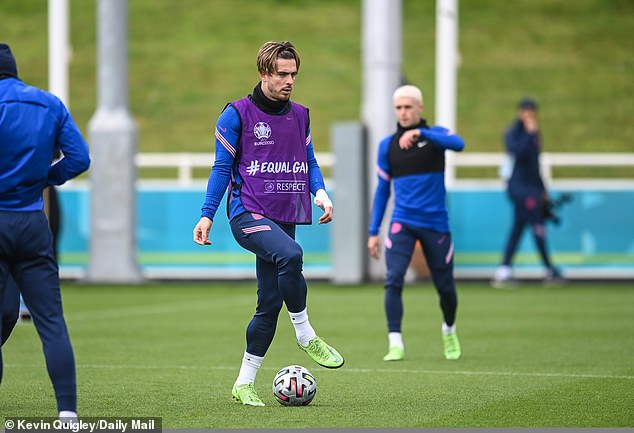 Jack Grealish will also be hoping to start in front of 60,000 raucous fans inside Wembley 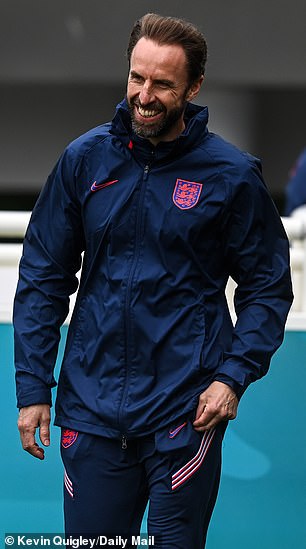 England are yet to concede a goal let alone lose at this summer’s Euros and have the chance to reach a first major tournament final since winning the World Cup in 1966.

Arsenal winger Bukayo Saka was again with the group having recovered from the knock that saw him omitted from the squad against Ukraine as a precaution.

Southgate’s side travel south from Burton on Tuesday afternoon, with captain Harry Kane joining the manager at the pre-match press conference.

Spirits appeared to be high in the camp as the players gathered to carry out a series of stretching exercises.

They did not seem keen on the gloomy July temperatures in Staffordshire, though, with a few members of the squad wrapping up warm and even wearing hats, gloves and snoods.

After they had loosened up, the players were then pictured doing some dribbling drills and Raheem Sterling, England’s talisman so far at the tournament, was snapped trying to do a piece of skill.

Captain Harry Kane and the rest of the attackers were later captured working on some shooting drills as they aim to be at the peak of their powers against the Danes.

It was announced on Tuesday morning that Kane will present an England shirt with Christian Eriksen’s name on the back to Denmark skipper Simon Kjaer as a show of unity for the Denmark star who suffered a cardiac arrest. 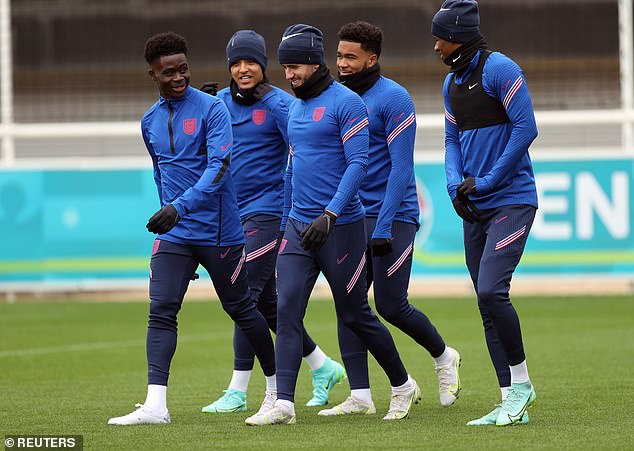 A number of players were wearing hats, gloves and snoods as they braved the mild conditions 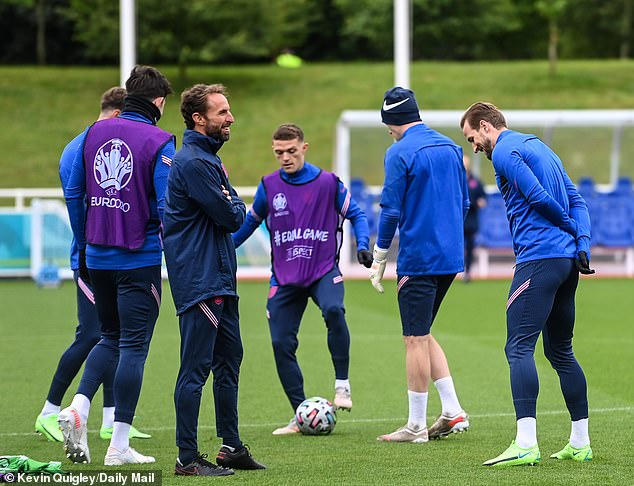 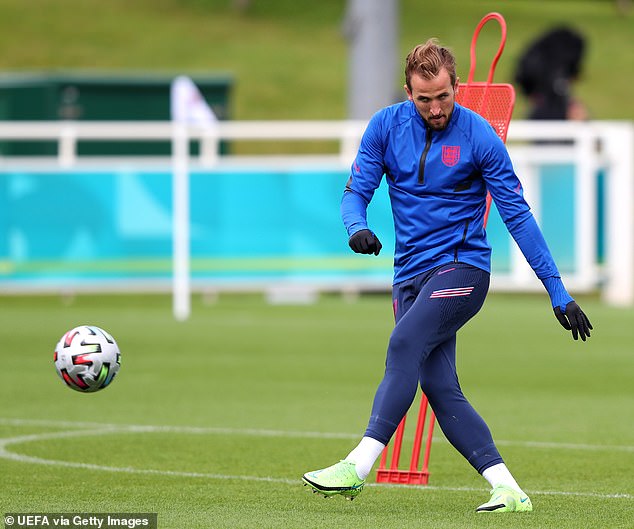 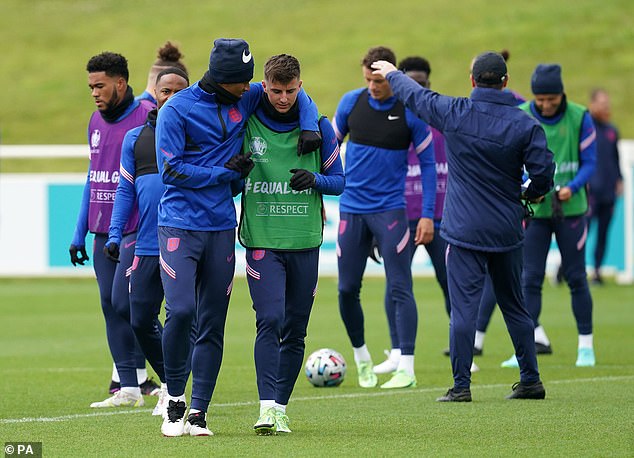 Southgate cut a relaxed figure as he presided over the session. The manager was seen with a beaming smile and chatting away with his backroom staff as he tries to formulate a plan to overcome Denmark.

The Three Lions came up just short at the 2018 World Cup in Russia, where they lost in the semi-finals to Croatia.

England then suffered more semi-final disappointment in 2019 as they were beaten by Holland in the Nations League.

But Southgate insists the experience gained on those two occasions will help England as they prepare for Wednesday’s Wembley showdown.

He told BBC Sport: ‘We are better prepared for this semi-final in that we’ve lived it before. We’ve had another two semi-finals prior to this one.

‘And although that doesn’t determine winning or losing a game of football, there are a lot of factors that we are aware of and we have dealt with before that help you to prepare in a better way. 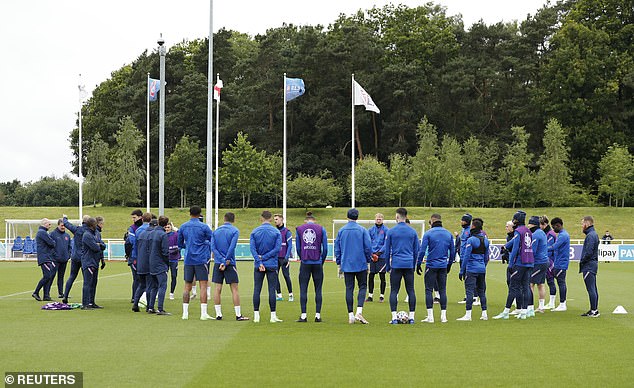 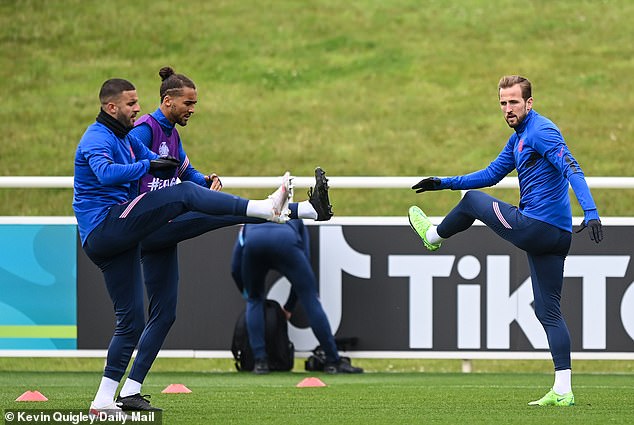 (L to R): Kyle Walker, Dominic Calvert-Lewin and Kane loosen up before the session begins 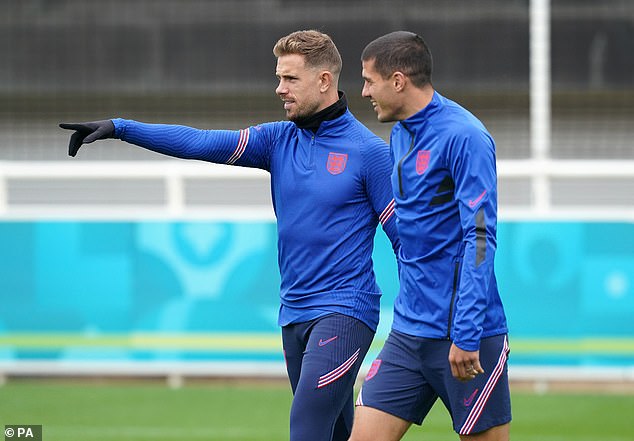 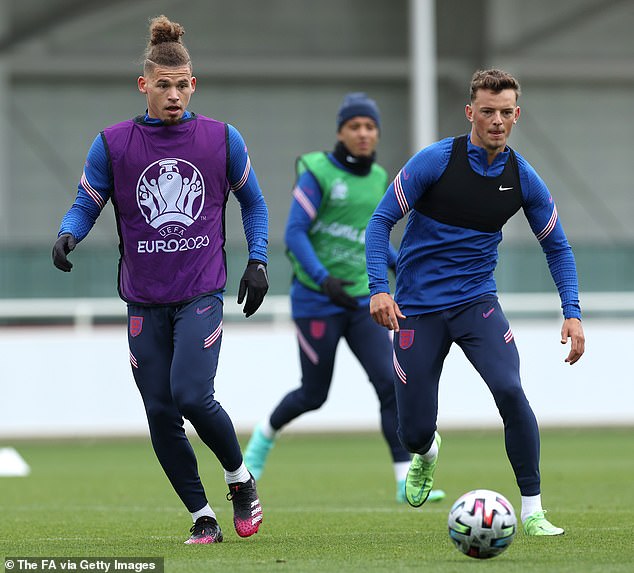 ‘In Rome, it was important to go and thank the fans who turned up in such numbers but everybody was quite calm about what was going on and we knew we hadn’t achieved what we want to achieve yet.

‘So those things I think are what prepare you for a big match like this.’

Kane, whose brace helped England thump Ukraine 4-0 in the last-16, has also urged his team-mates to do everything to seize their last chance to create a football fairytale.

The Tottenham striker will lead Southgate‘s squad knowing that an opportunity of this nature for this squad – to win a major tournament on home soil – will never come around again.

The FA want to host the World Cup in 2030 but, by that time, many of this group will have retired. Kane, for instance, will be 36 and unlikely to be England’s main man.

‘To think there is going to be another 20,000 people in there, it is an added motivation,’ said the Tottenham star.

‘For me and a few of the older more experienced ones it will be the last chance to play a major tournament game at Wembley.

‘What an opportunity. What a moment it will be. Hopefully we can win and have similar scenes to what we had against Germany.’